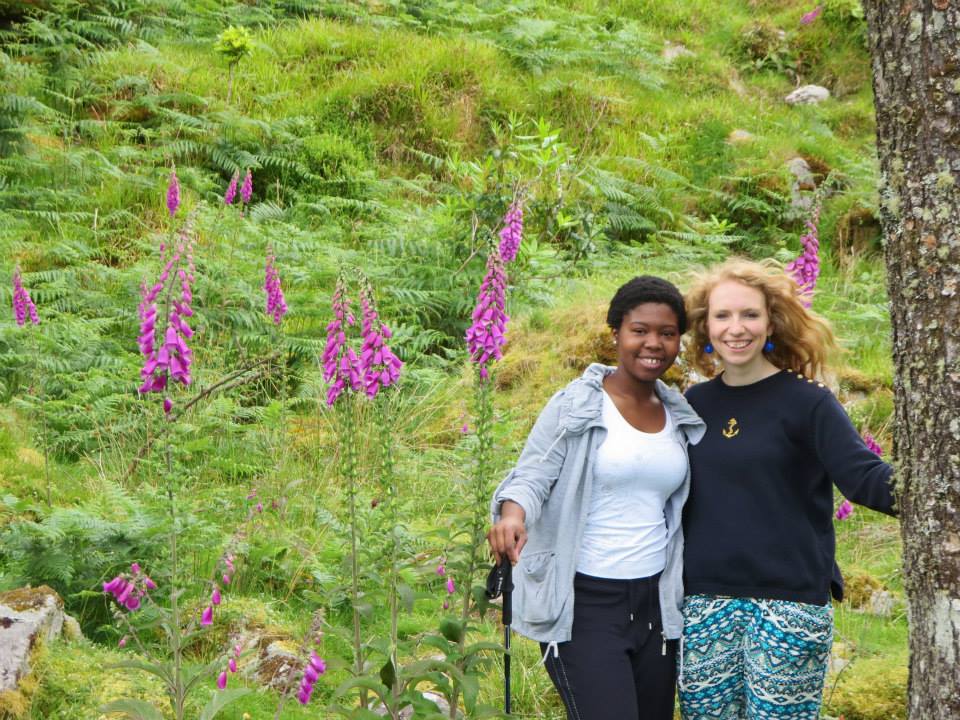 I recently hiked Torc Mountain in Kerry. The name comes from an Irish word meaning “boar.” The legend goes that an enchanted boar was killed on this mountain by a legendary 3rd century hero named Fionn mac Cumhaill. Even though I did not see any enchanted boars (or any regular boars for that matter) on that day, this hike has to be one of my favorites because of how we attempted to climb the mountain. 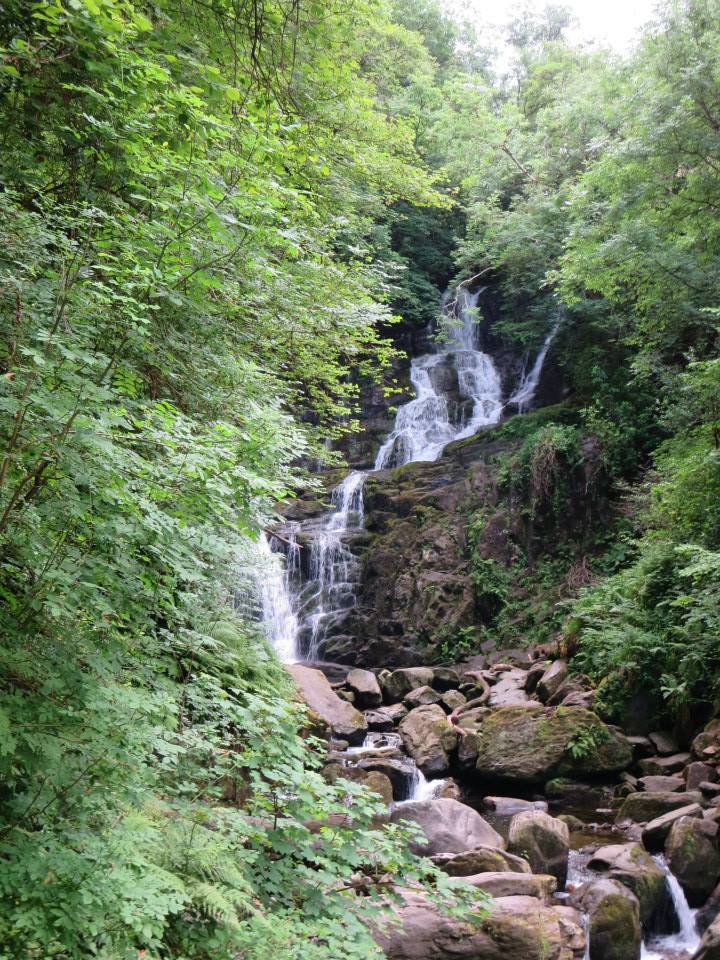 To start off, I had heard that the hike was classified as “intermediate,” so being the silly kid that I am, I decided that Sperrys would be an okay choice for footwear. An “intermediate” hike wouldn’t necessarily require shoes with extra traction and my Sperrys happened to go better with my pants than runners would. Naturally, that’s the most important thing when you decide to go hiking, right? If you answered yes…you’re wrong. I did regret my choice of shoes when the group of us decided that we’d have a 100m race up a steep slope. Not wanting to be outdone, I ignored the fact that I was wearing shoes that were better suited to be on a boat than sprinting up a semi-rocky slope and ran anyways.

Our biggest mistake was somehow missing the path to the summit. I’m not sure how we did that, but fast-forward a little bit and you see twelve of us going any direction that seemed remotely “up.” The climb definitely had a Darwinian feel to it as one-by-one people decided to go back. By the time we got near the top, it was so steep that we were literally pulling ourselves up by blueberry bushes and other shrubbery every step.

After a lot of yells of encouragement and several false summits, four of us made it to the top of the mountain!

The view was absolutely breathtaking. From the top, you have a 360° view of Kerry. Everywhere around you are mountains and lakes in the valleys.

We stayed up at the summit for a good amount of time, snacking on apples and oranges, doing yoga poses, taking jumping pictures, watching rain clouds refill the lakes many miles away, and taking turns kissing a frog. He didn’t turn into a prince – I guess only boars are enchanted on Torc mountain.

On the way down, we came across some very cool boulders. That was yet another place for some silly pictures. One of my friends scaled a pile of rocks that were arranged somewhat precariously for the “perfect Rafiki and Simba shot.” Looking at the photo later, this looks nothing like Rafiki holding Simba up to the animal kingdom… 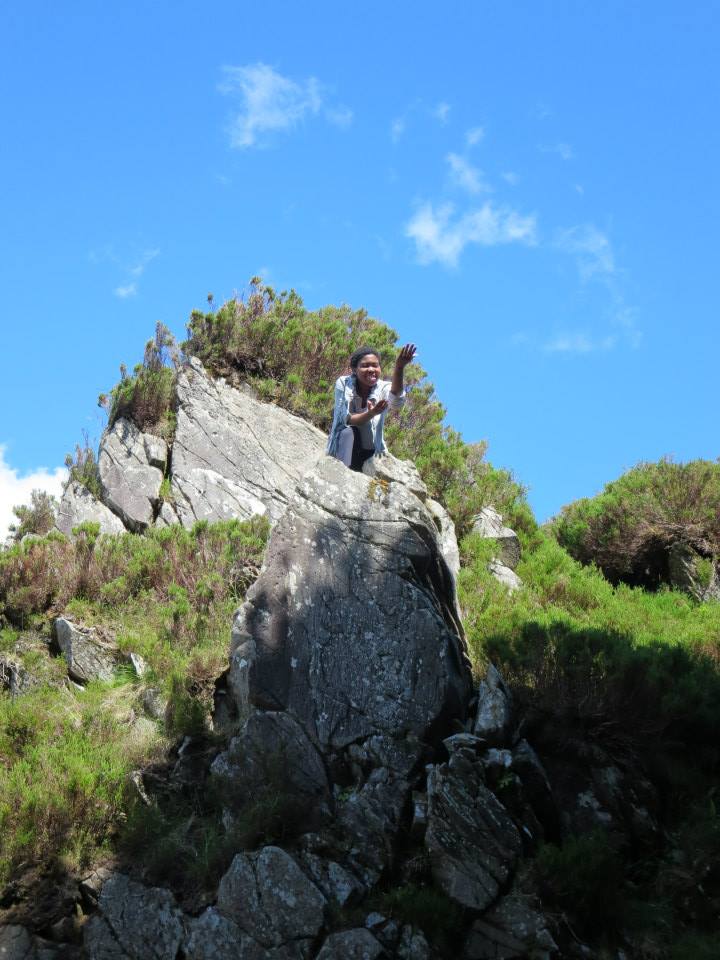 Another one of my friends is very into rock-climbing, so between intervals of running down the mountain to get back to the base to meet up with everyone else on time, he’d start climbing up sheer cliff edges. 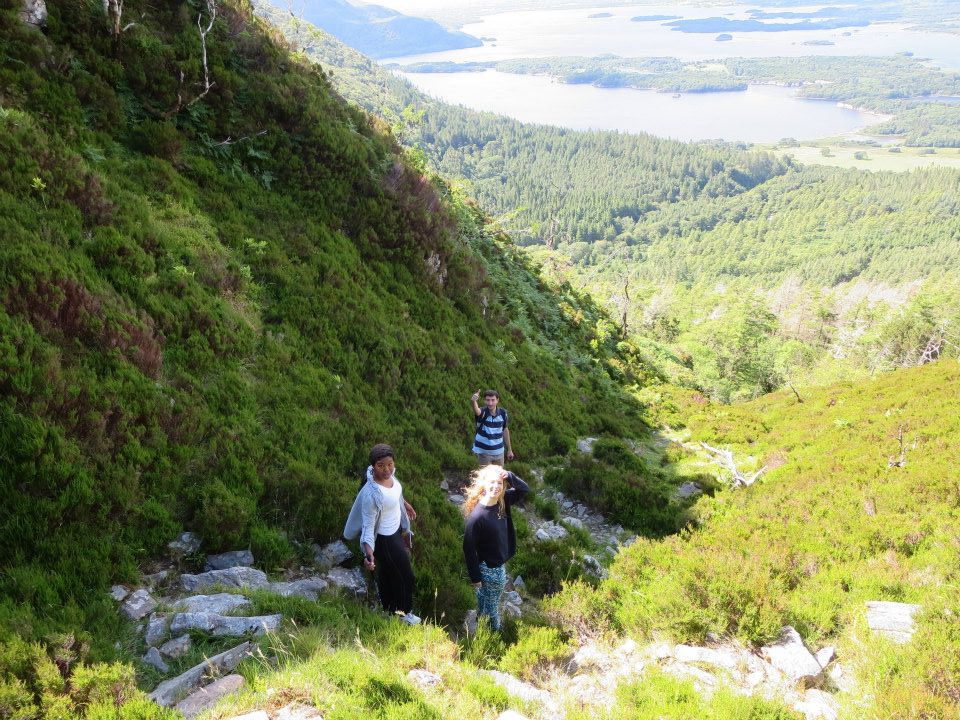 By this point, the sky got very cloudy and gray, as it does in Ireland, so we wanted to get back to the base before the heavens opened up. Magically, by the time we made it to the bottom, it became sunny again. Ireland is sometimes strange like that. 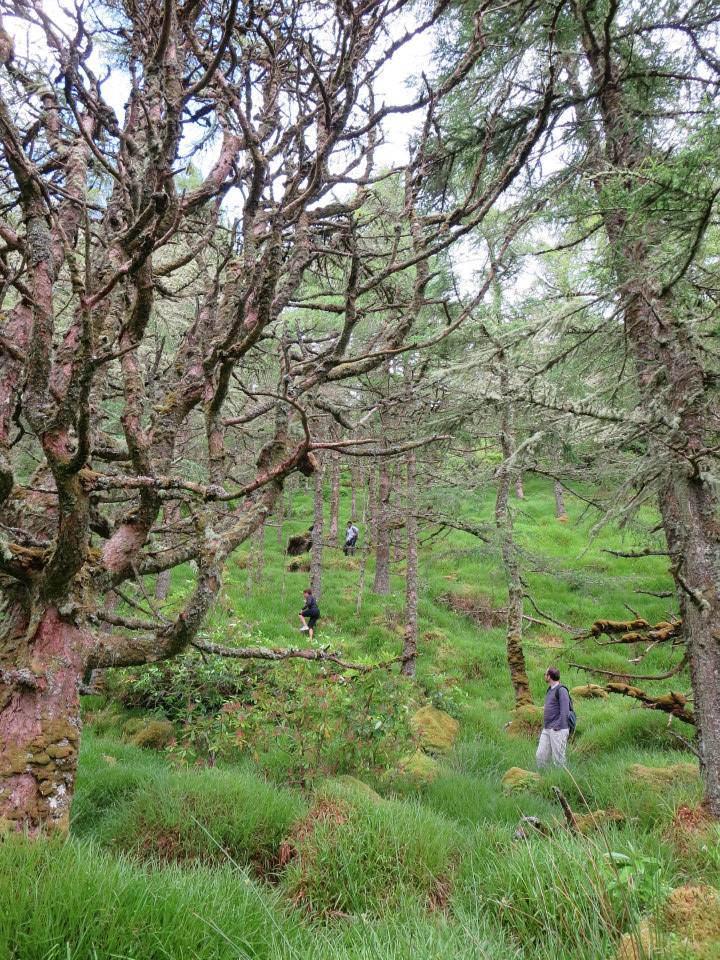 I really loved that hike and not just because the mountain was really pretty. Even though it was just because we missed the path, we all felt very accomplished that we made it to the top. It didn’t matter that we were scratched from hoisting ourselves up using blueberry bushes and that one of our bags accidentally got thrown into the river. It was a really fun hike, Sperrys and all. If you’re ever in the mood to scale a mountain, go to Torc!